For all of my pinball and video game customers I have a new product in the works.  Many of the pinball and video game consoles use LM323K devices as 5V regulators.  As many of you may know the LM323 has now been discontinued by all the manufacturers and prices are beginning to skyrocket.  This was a very popular and long lived part so there is probably many parts sitting in inventory at many companies so supplies won’t disappear overnight.

In many applications the LM323 is hard to substitute since it is a high current regulator rated at 3A.  I made a PCB with the same footprint as the LM323 and it contains a switch mode voltage regulator. 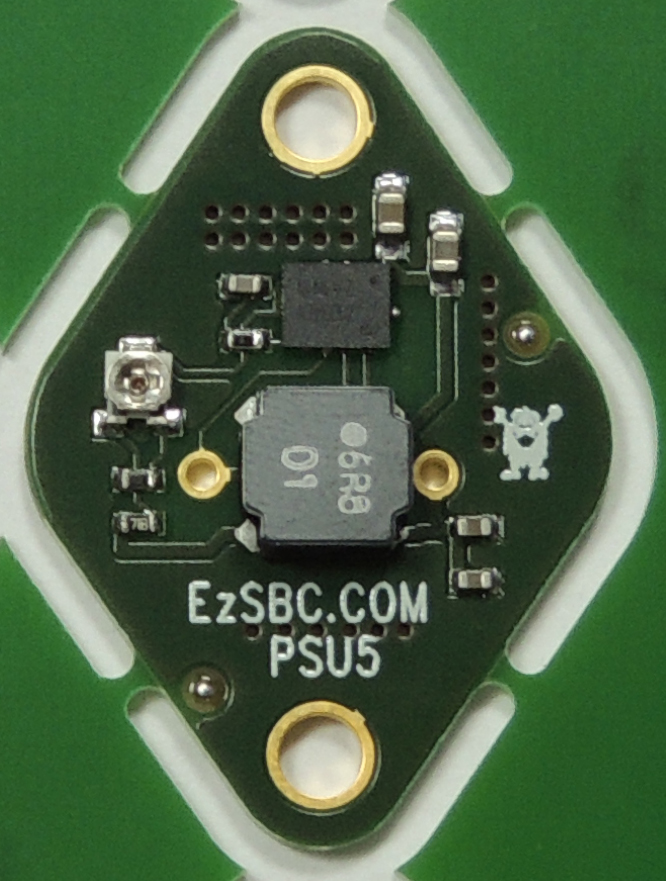 This is a photograph of one of the first prototype boards still in the panel.  Unlike any of the other three pin regulators this one contains a trim resistor.   Even though the accuracy of this design is +- 2% instead of the +-5% of the original LM323 I included the trimmer to allow fine adjustment of the output voltage.  In many applications where the LM323 were/are being used the 4.75V minimum voltage of the LM323 caused problems so people made arrangements to increase the voltage by some other means.  By allowing the voltage to be fine tuned I hope to ensure compatibility with all the existing applications.

The LM323 replacement is designed with components rated at 4A.  The bottom of the PCB contains only the ground connection, same as the LM323.  The neat rows of vias are thermal connections between the top and bottom of the PCB.  One of the items that has to wait for the production PCB is the final current rating of the LM323 replacement without a heatsink and with the small heatsinks found on some PCB’s.  It will be better than the original but the aim is to reach 3A continuous from a 12V input without a heatsink.  The copper on the prototype PCB’s is only 35 micron thick and that limits the thermal performance.  The production PCB’s will have 70 micron copper to help with heat conduction from top to bottom.  All the filter capacitors are on the PCB.  The height of the assembly is 4mm above the PCB or 5.6mm total measured from the bottom of the PCB to the top of the highest component.  The exposed areas of the copper is coated with nickel and gold to prevent corrosion even in very hard conditions.

Production quantities should be available by the end of May 2014 with pricing for single units at around $8 and discounts for volume purchases.