The LE40V arrived yesterday (Dec 18). The pick and place machine arrived as promised in a gigantic crate with the feeders, PC and the machine professionally packed. I was surprised when the truck arrived with just a driver, no helpers. The driver maneuvered the truck under a carport and single handedly offloaded the crate with just a hand operated forklift and the lift gate of the truck. It was raining pretty heavily and it was cold so the crate was left unopened and we waited for the rain to stop. It was around five o’clock when the rain finally let up enough so we thought we could unpack it and get it indoors. The container is constructed as a wooden box that can be lifted with a forklift. It has a million screws. I took the lid off and it revealed a bunch of boxes on top of a wooden partition. The boxes contained the PC, monitor, feeders, bank feeders and some tools. We set all the boxes aside and removed another million screws. We removed all four side panels of the box and some cross beams holding the LE40V in place. In the manual it says that the machine is held onto the base by four bolts so we tried to locate the bolts. No luck. We tilted the pallet to look underneath. That sucker is HEAVY! and surprise! no bolts. We then thought that the feet is holding the machine in place and tried to remove them by unscrewing them. When we lifted the machine to take the weight off the feet, one foot came off. It left a rounded rubber piece that sits in the foot and the foot stuck to the pallet. New plan, lift the machine off the feet. That worked and we ended up with three feet attached to the machine and one stuck to the pallet. Next we carried the machine on top of the pallet closer to the work area and rested it on top of a sturdy box. Here two of us lifted the machine off the base of the pallet, two people removed the pallet and we carried it indoor and put it on top of its table. It couldn’t have been more than 10 yards but it is down a narrow passage and through a door that is just barely wide enough to get through. It felt like half a mile. That machine is heavy. The manual says 250lbs but I’m sure its more, it certainly feels like a lot more. The pallet and content weighed in at 600lbs (according to the waybill).

After maneuvering the machine to its final resting place in the corner the cover would not open, it was too close to the wall. We had to move it (and the table) again.

Assembly was easy as the machine is fully assembled in the factory and then tied down for shipping. The only things to do were hook up the PC, the vacuum pump and remove some straps. This was quick and easy. The hard part was that the software wouldn’t run, it complained about some hardware being missing. Opening the PC and pushing all the cards back into the slots cured that problem. 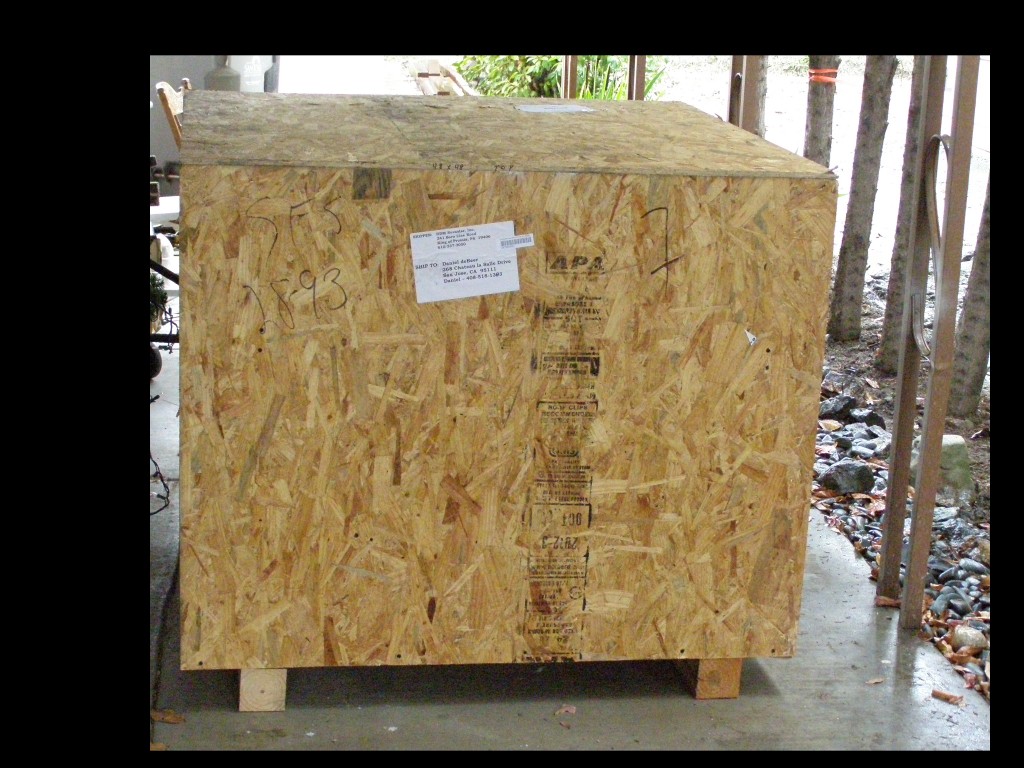 The LE40 in its shipping container 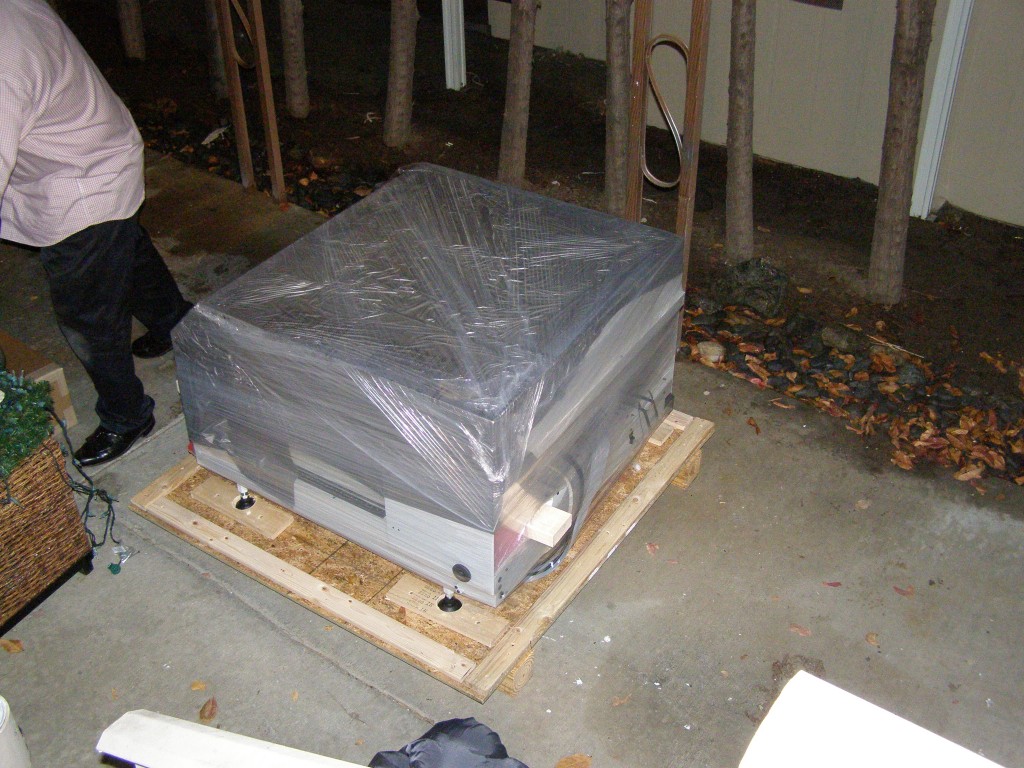 The LE40V still wrapped in plastic 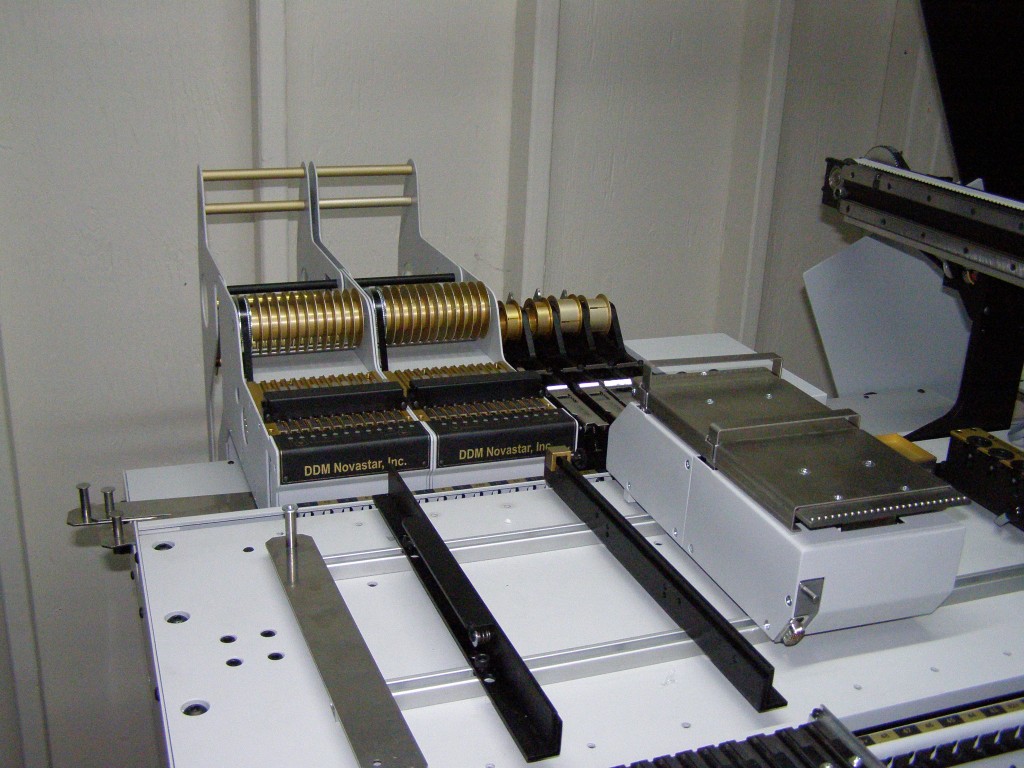 The delivery of the new Pick and Place machine was confirmed by the shipping company for 17 Dec 2012.  Finally we will have an accurate, fast machine.

Pick and Place machines are car sized purchases and a lot of thought and research went into the choice of the machine.  After sifting through the options for desktop machine only two machines were seriously considered.  The Manncorp 7722FV and the DDM Novastar LE40V.  Both machines are small enough to fit through the doors to our work area.  This is a big deal, kind of a showstopper.  Pick and Place machines can be large and heavy and are made to be rigid.  This often means that the frame is welded or cast and can not be disassembled.  Also, disassembling a machine means re-assembly and alignment.  Alignment is also critical in the machine meeting its accuracy spec.

The runner up was the 7722FV.  Several smaller manufacturers such as Adafruit and Eurobuilder went with the 7722FV and since they must have done their homework I had a very serious look at the machine.  It is a bench-top machine and does not have a welded or cast frame.  It is reasonably light, around 150 lbs.  It has real feeders and optical alignment.  It is reasonably fast at around 2200 components per hour and can handle all the components that I see in immediate future.  Here are some photos http://www.adafruit.com/blog/2009/10/13/our-manncorp-7722fv-pick-and-place-is-here/

In my evaluation of the machine I was slightly uncomfortable with the stated accuracy of the machine and to a lesser extent the way in which the machine is constructed.  The machine’s accuracy is adequate for current parts but it has no room for the feature shrink in packages occurring now.  A while ago, everything was dip packaged and pin pitch was 2.5mm.  Then everything was leaded surface mount.  Now lots of new parts are only available in leadless surface mount and ball grid (or chip scale) packages.  Currently the ball pitch is already down to 0.4mm and t is likely to shrink in the future.  0.4mm is the limit of the 7722.  Also, the 7722 is an open loop machine.  Positioning takes place by counting pulses after a reference was established, the gantry position is not measured.  The reference is found by bringing the part over an up-looking camera and doing a pattern match to a known good position of a part on the nozzle.  The nozzle (and gantry) is then moved to the desired position and the part is placed on the PCB and held in place by the solder paste.  In any well designed machine the movement does not miss steps after the alignment and if the part does not move on the nozzle the only error is the positional error inside the step.  This may appear to be negligible but in practice it depends on exactly where the motor is commanded to stop and the speed at which the motor slows down.  Friction, bending and stretching and temperature effects all add to the complexities.  That is why the accuracy is not equal to the resolution.  The stated resolution of the machine is much better than the accuracy.

My second reservation about the machine is the construction using Aluminium profiles.  When stiffness matters this is not the best way to build the frame.  No doubt the machine meets its accuracy when it is new but I don’t know how it will age.  Secondary things that I took into consideration was the design of the feeders.  The feeder design is ‘classic’.  It has an indexing mechanism and can advance the tape quite precisely and quickly.  The feeder is a mechanical design.  I can’t remember if the machine had an option for ‘smart’ feeders but the default feeder for the LE40 is smart.  A ‘smart’ feeder has an electrical interface to the machine and it can be identified by the machine to verify that it is in place.  Smart feeders also maintain a count of the parts used making inventory tracking easier.

The LE40V was the winner.  The machine base is welded steel and the motion is closed loop in the sense that the actual gantry position is measured using linear encoders.  This gives me confidence that the long term accuracy will be the same as the ‘factory’ accuracy.  The other major factor influencing my choice was that DDM Novastar gave me access to the manuals before purchase and the manuals are complete, legible and in good English.  They even contain circuit diagrams of the machine.  From the manuals I recognized the motion controller used in the machine as a controller made by Galil.  I have first hand experience using their controllers in motion systems and they are used wherever high quality motion control is required.  My current machine uses trapezoidal profiles for the motion and the jerk is not welcome.  S-curve motion is definitely not a luxury.

The price of feeders are also a consideration.  Very often you spend as much in feeders as on the machine.  The LE40 has a very clever bank feeder for 8mm tapes.  8mm tapes are by far the most common size and you can never have enough of them.  The bank feeder is a ‘single’ feeder for 12 8mm tapes and it costs less than a 5 individual 8mm feeders.  Since I have existing products I knew from the beginning that I need more than 12 8mm feeders and this is an economical solution.  The prices for the LE40 feeders are comparable to the feeders for the 7722 but they are smart feeders.  Even though the initial price for the LE40 was higher than the 7722 by the time I factored in the price for the feeders, and external PC and a compressor, the LE40 ended up at roughly the same price.

As they say in the movies, watch this space.  I will provide pictures and details of my experience with the machine.

Our old and clunky pick and place machine can’t keep up with demand for some of the modules we sell.  The current machine was bought second hand from someone who had stopped using it.  When the machine arrived here there were some difficulties with the software and I had the software and machine upgraded by the manufacturer.  This solved most of the problems.

Nothing lasts forever and the pick and place machine is no exception.  There is nothing physically wrong with the machine and it still works.   The vision system is ok but the component picking is not completely reliable and this causes the tape to jam.  Sometimes a component is dropped near the tape or on top of a neighboring tape.  The component then get trapped in the small spaces in the tape and this causes the machine to stop and wait for a manual intervention.  The LS1 level shifter sells well and it has small margins.  To manufacture it economically it has to be made in panels.  There are enough components on a panel so that the machine jams on nearly every panel.

The vision system is optimized for small parts and this causes issues with bigger parts.  When a part is picked up and moved to the up looking camera the vision alignment must find the part somewhere in the picture in order to align it.  When using a parts larger than 144 pin QFP the part nearly fills the frame.  The vision system fails to align the part if any piece of it is outside the frame.  This is limiting the size of parts that we can use in our designs.  Watch this space for more news on our adventure in surface mount assembly. 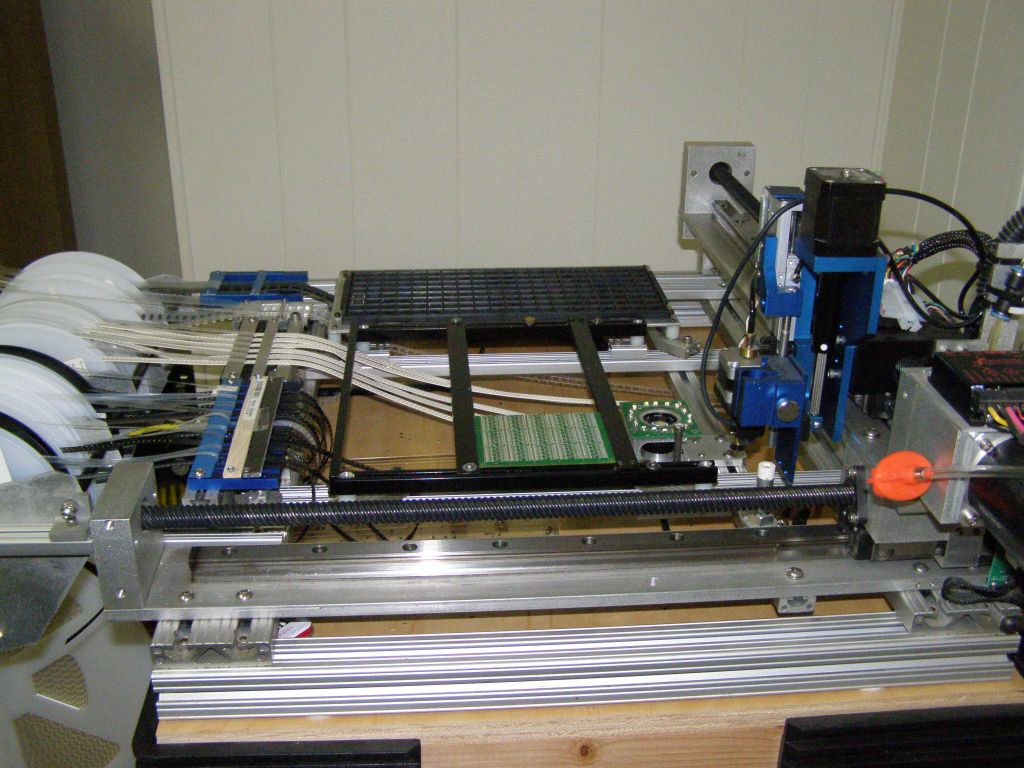